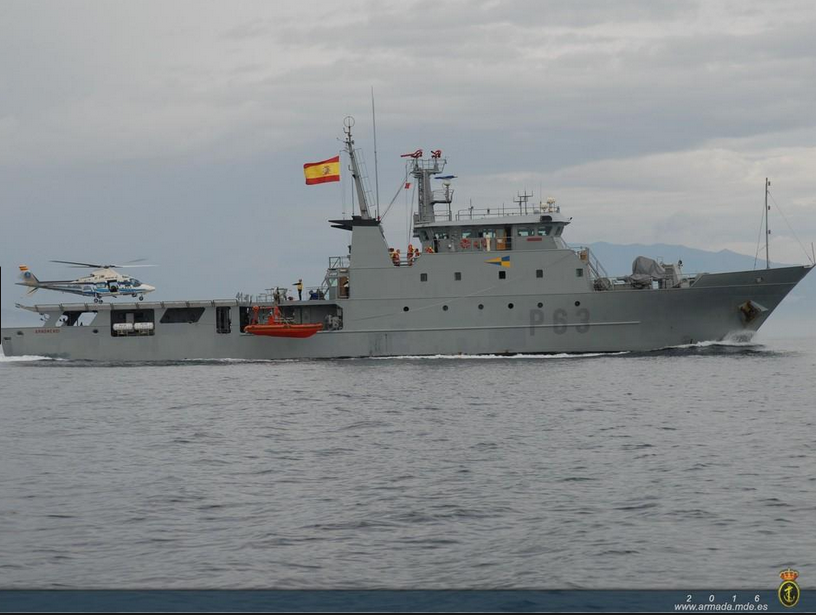 A naval tradition which began last year when a ship from the modern day Spanish Navy visited these shores for the first time since the loss of three Spanish Armada galleons at Streedagh in 1588, we are set to welcome the arrival of another Spanish ship to these waters for this year’s Spanish Armada International Conference (September 22nd-24th spanisharmadaireland.com).

Last September the OPV Centinela arrived in Sligo for last year’s Celtic Fringe Festival, and we are delighted to announce that The OPV Arnomendi of the Spanish Navy will make the long trip to the north west of Ireland for this year’s historic Armada Conference.

And for the first time, members of the public will be able to go aboard the ship for a guided tour (Saturday September 23rd between 11:00am-1:00pm and again between 3:00pm-6:30pm) and while these tours are free, members of the public are advised to arrive early to avoid disappointment. Visit will be arranged on a first-come first-served basis and no prior booking is available.

As Sligo does not have a deep water port suitable for the arrival of a ship such as the OPV Arnomendi, visitors will have to travel to Killybegs, County Donegal, where the ship will be moored alongside the deep water quay, to avail of the opportunity of going on board. Here, Commanding Officer of the OPV Arnomendi, Lieutenant Commander Alfonso Martínez Ferra, and his crew will welcome you on board. He is looking forward to the upcoming visit and to attending the Spanish Armada International Conference:

“As a Navy Officer, I have sailed through all the oceans and visited nearly sixty different countries. Now, It´s going to be my first time in Ireland and It couldn’t be a better chance. Taking part in this Celtic Fringe Festival is an honour and I hope that we can share a great weekend, always keeping in mind all those heroes that died on the beach and also all those anonymous Irish heroes that helped the survivors. Me, my crew and my ship are at your disposal to come and visit us,” says Lt Commander Martínez Ferra, ahead of the upcoming visit.

The ship will then leave Killybegs on Sunday morning to arrive off Streedagh Beach in Sligo for the annual Remembering the Armada ceremony, which commemorates the deaths of over 1,100 Spanish Armada sailors who drowned at Streedagh in 1588. Three ships, La Santa María de Visón, La Lavia and La Juliana, were wrecked at Streedagh and now lie underneath the sands there. A recovery mission in 2015 retrieved cannon and artifacts from La Juliana, and these are currently undergoing conservation.

On behalf of the people of Sligo and Donegal, we’d like to extend the hand of friendship to the visiting crew members of the OPV Arnomendi, and we look forward to further building on the relationship between our two countries.