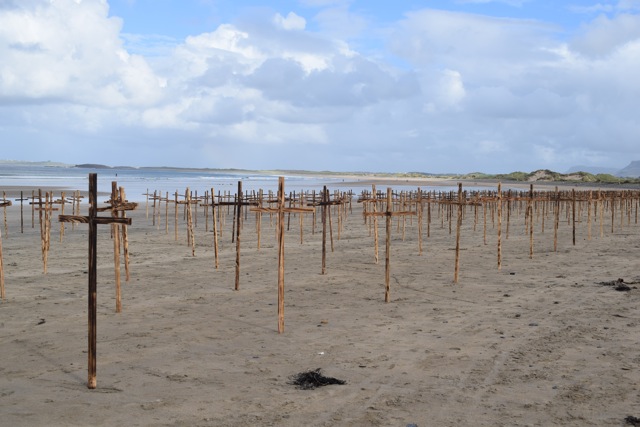 As the curtain came down yesterday, Sunday, on a highly successful Spanish Armada International Conference in Sligo, the Spanish Ambassador to Ireland called for Sligo to grow and develop our strong Spanish Armada connections.

Speaking at the Remembering the Armada ceremony at Streedagh Beach, HE José María Rodriguez-Coso said: “Congratulations to everybody, it was an excellent job and I think it’s a very interesting exercise of continuity for the future.”

The Ambassador also spoke of being deeply moved by the beach ceremony, which saw local volunteers embed 1,100 timber crosses into the sand at Streedagh, each one representing the life of one sailor from the Spanish Armada, where huge loss of life occurred after three Spanish ships ran aground and were wrecked at Streedagh during Winter storms in 1588.

Many Spanish people travelled to Sligo for the conference, among them a large contingent of members of the Spanish Navy, who arrived into the port at Killybegs aboard the OPV Arnomendi. They too were impressed with the efforts the people of Sligo have made to pay tribute to their fallen predecessors. Last year, the Spanish Navy sent a military ship to take part in the Celtic Fringe Festival, and Admiral José Antonio Ruesta said that it was very important for Spain to continue to grow the bonds between the countries with the arrival of the OPV Arnomendi.

“Last year was the first time that a Spanish warship entered Streedagh beach in over 400 years, and we will keep this (memory) as a treasure, and will try to send a ship on every occasion that we are available,” he said.

Of the conference itself, which saw world-renowned Armada experts from Spain, Portugal, Italy, Sweden, the UK and Ireland descend on Sligo, Eddie O’Gorman, Chairperson of the Spanish Armada International Conference organizing committee, said that he was delighted with the turnout at all of the events and also with the quality and detail of the presentations and of the discussions which ensued.

“This really was a game changer in relation to the connection we in Sligo have with the Spanish Armada,” he said. When you consider the rich history we have with this story through the Streedagh wrecks and through the letter of Captain de Cuéllar which describes what happened at the time, it was a matter of when, and not if, a first ever Spanish Armada International Conference would take place in Sligo. Now that we have helped to put this important part of our culture and history back to the forefront where it belongs, the next step is how we now build towards the ultimate goal of GADA (Grange & Armada Development Association), which is to ensure that an interpretive centre will be built in Grange to house the cannon retrieved in 2015. This way, the tourists will come, the entire community will benefit and Sligo will have carved itself placed itself very much at the heart of the Spanish Armada story in Ireland.”