Thanks from Remembering the Armada 2019 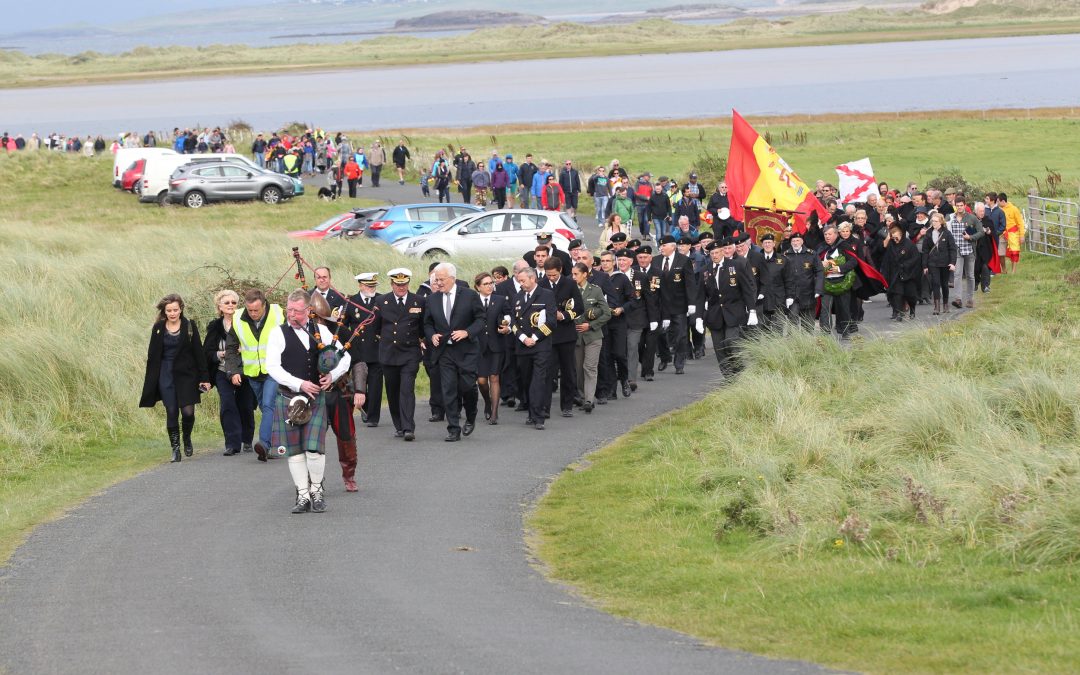 As the curtain is drawn on Remembering the Armada 2019, Chair of Spanish Armada Ireland Eddie O’Gorman has said that the festival “will go down as the most memorable of all, both for the local community and for our visitors.”

Remembering the Armada was attended by greater numbers of visitors than ever before, including many Spanish people, some of whom travelled from Spain to Grange just to experience a unique festival which commemorates the events of the Spanish Armada.

On September 21st 1588, 3 ships from the Spanish Armada, La Lavia, Santa María de Visón and La Juliana, were wrecked at Streedagh Beach in Sligo, with the loss of over 1,100 lives. Every year the people of Grange and Streedagh commemorate the tragedy through a weekend of cultural events.

The new Spanish Ambassador to Ireland, Sñr Ildefonso Castro, who was attending his first Remembering the Armada, said that it would not be the last time he would attend, and he looks forward to returning again next year. Speaking at the Armada monument that overlooks Streedagh beach, he said: “Thank you for your enthusiasm, for your commitment and for your creativity. Every year the community of Grange does it’s best to make this event grow, and you always succeed. More and more people in Ireland and Spain know about the commemoration and come here to remember the Armada together. The Spanish Embassy will gladly and proudly continue to support your wonderful work.”

Cathaoirleach of Sligo County Council, Mr. Tom McSharry, who also attended the weekend’s Remembering the Armada Parade, thanked the people of Grange for their ongoing work to build on the area’s strong Armada legacy, and he added: “It is the aim of Spanish Armada Ireland to build a full Interpretive Centre so that many more people can come to this part of the world, located along the fantastic Wild Atlantic Way, to find out more about our history, heritage and culture, and this incredible Spanish Armada story. Sligo County Council will support you in realizing this great ambition.”

A significant part of this year’s events was the presence of many more Spanish people than ever before. They came to the festival from Sligo, from elsewhere in Ireland, and indeed from Spain itself. It is estimated that of the hundreds who attended the Parade, a very significant amount, up to 50%, were Spanish.

Another important step was the presence of the Spanish Naval vessel ESPS Centinela, and the LÉ James Joyce for the weekend. While the Spanish Navy has attended Remembering the Armada for several years, this was the first time that ships from both naval services were present together, again underlining the growth and importance of this weekend for the naval services of both countries.

“This is a huge community event, which the people of Grange support in greater numbers every year,” said Eddie O’Gorman of the work that went on for months in planning and producing the events. “We had some superb innovations this year, like the acclaimed De Cuéllar Suite concerts and the Armada 8km run and walk. Every year we try to plan something new, and it’s wonderful to have such a positive response from the Spanish and Irish public.”

As a final word he added: “I know our hard working committee will now get a well deserved rest, but i want to point out that next year will be the 10th Remembering the Armada event, so I don’t want anyone resting for too long, and I look forward to getting everybody involved in planning even bigger and greater things for next year!”