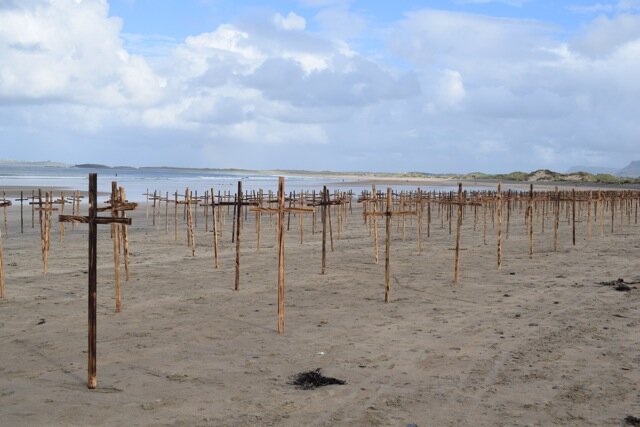 The annual Remembering the Armada commemoration of the Spanish Armada at Streedagh will take place online only this month due to the Covid-19 pandemic.

Now in its 10th year, this year’s Remembering the Armada programme will take place between 18th-20thSeptember and is available completely free of charge to the public on SpanishArmadaIreland.com.

For details of each online event visit the Festival page.

“We have a wonderful series of online events this year,” says Eddie O’Gorman, Chair of Spanish Armada Ireland. “Despite the challenges involved in running an online-only festival, this has enabled our committee to think outside the box in terms of what we can offer viewers in Spain and Ireland, people who normally would like to be here in person.”

The main innovations in this year’s festival is a series of three online lectures which will give a fascinating insight into the Armada’s local history in Sligo. The two main dive and recovery operations of 1985 and 2015 which yielded several Spanish Armada cannon will be discussed with some of the central characters involved.

The original Streedagh dives which took place after the three wrecks were discovered in May 1985 will be discussed in detail (Saturday September 19th at 9pm). Colin Martin was an advisor to the dive team led by Stephen Birch and Alan King which first found the wreck site, and he describes what it was like to clearly see the remains of the three ships lying in shallow water just a short distance from the shoreline at Streedagh Beach. Nessa O’Connor was an archaeologist and curator working for the National Museum, and this was her first dive – what an experience this must have been for her to see the wrecks that were clearly visible under the water.

“I was most impressed by what I saw,” says Colin Martin of his memories of the Streedagh dives of 1985. “The guns (cannon) weren’t exactly shining, but they weren’t corroded and they were in remarkable condition.” Nessa O’Connor adds “As I recall it, the Juliana (one of the wrecks) was only in around 10 metres of water. I can remember very clearly seeing the rudder, running my hands along the edge of it, and seeing gun carriage wheels, and I think I also saw a cannon at that time. It was really exciting, for effectively the first wreck I had ever dived on.”

35 years after the event, both will describe the recovery operation which yielded three cannon and a smaller falcon pedrero gun, and they will also delve into the complex legal case which followed the Streedagh dives, and which went all the way to the Supreme Court. An interesting webcast for anyone with a passion for local history.

Both speakers portray Streedagh as a historical site of great international importance, pointing out that it is the only Armada wreck site which contains three ships, and they also point to the accessibility of the site when the wrecks become uncovered, a somewhat rare event which only happens infrequently when the sands that cover the wrecks are removed by the sea.

On Sunday September 20th at 5pm, we will hear about the more recent dives of 2015. These events, which brought the Streedagh wrecks to worldwide attention, led to the recovery of 9 Spanish Armada cannon and other artefacts. The dive team involved – Fionnbarr Moore, Connie Kelleher and Karl Brady, of the Underwater Archaeology Unit of the National Museum of Ireland, will describe this incredible dive and recovery operation, and they will also outline the conservation process which is currently underway and which will ultimately lead to the cannon being available for public viewing.

A third online discussion will start the online weekend programme. Following a free screening of the recently produced ‘Armada 1588 : Shipwreck & Survival’ film on the life of Spanish Armada Captain Francisco de Cuéllar, who survived the wrecks at Streedagh, we hear from members of the cast and crew who bring us behind the scenes. Director Al Butler of Mediacoop will be joined by lead actor Fernando Corral and set designer Lynne Williams in conversation with one of the film’s producers, Micheál Ó Domhnaill. So if you want to know what is involved in the production of a high quality television docudrama, join the team online on Friday September 18th at 9pm, following the screening of the film an hour earlier.

Finally, to the centrepiece Remembering the Armada event This takes place on Streedagh Beach every year and usually involves hundreds of people from home and abroad congregating to pay tribute to the lives of almost 1,000 Spaniards who died at Streedagh in 1588.

The remembrance event will take place again this year, but unfortunately, the public will be unable to attend. The Spanish Ambassador to Ireland, H.E, Mr. Ildefonso Castro will be joined by Cathaoirleach of Sligo County Council, Councillor Dara Mulvey, for a private commemorative ceremony at the Armada monument which overlooks Streedagh Beach, and where a wreath will be laid at the monument in tribute to the fallen. This will be streamed online on Sunday 20th September at 4pm.

This year, the Spanish Armada Ireland committee want to make a special effort to reach out to our many friends, patrons and supporters here and abroad.

“We have built up a wonderful friendship with so many people in Spain, Ireland and elsewhere over the past decade,” says O’Gorman. “We want these events to show that, although we cannot be together in person this year, we are together in spirit. And to our many friends in Spain, our heartfelt wish is that we will all be able to be here in person at Streedagh for the Armada commemoration in 2021.”

All of the events from Remembering the Armada 2020 (September 18th-20th) will be streamed FREE via SpanishArmadaIreland.com using Facebook or YouTube, so please visit the website today to find out more.

Please note that we have received funding from both Sligo County Council and Mayo/Sligo/Leitrim ETB to produce the online programme for this year. We are very grateful to them and to Fáilte Ireland for their continuing support. For more information visit https://www.wildatlanticway.com.