After escaping the Spanish hangman’s noose to surviving against all odds in Ireland, De Cuéllar had many reasons to write his famous letter.

When Captain Francisco de Cuéllar of the Spanish Armada found himself washed ashore at Streedagh Beach in Sligo in September 1588, his worst nightmare could hardly have matched the scene that lay before him. All around him, his countrymen lay dead or drowning, those that remained alive were defenceless in the face of heavily armed English soldiers who lined the beach. Escape seemed impossible.

For the Spanish, the Armada had been a disaster. In May of 1588, 130 ships, 8,000 seamen and some 18,000 soldiers set sail from Lisbon, comprising the greatest naval force ever assembled. Its purpose was to invade England, dethrone the Protestant Queen Elizabeth, restore Catholicism and ensure that Spain alone would remain the dominant world power. But they had been defeated in battle by the English, through a mix of poor leadership and outdated weaponry, and were forced to flee northwards, around Scotland and Ireland, on a long journey back to Spain.

Ireland was unknown to most of the Spaniards. Just a handful had sailed in Irish waters before, most had no idea exactly how far west they needed to sail to stay clear of the treacherous western coastline. Many of the great Armada galleons did manage to return to Spain, but some, in particular the merchant ships, struggled badly. A sobering fact is that, while the Armada only lost 6 ships in battle against the English during the naval conflict, at least 26 more were lost off the Irish coast on the long voyage home. 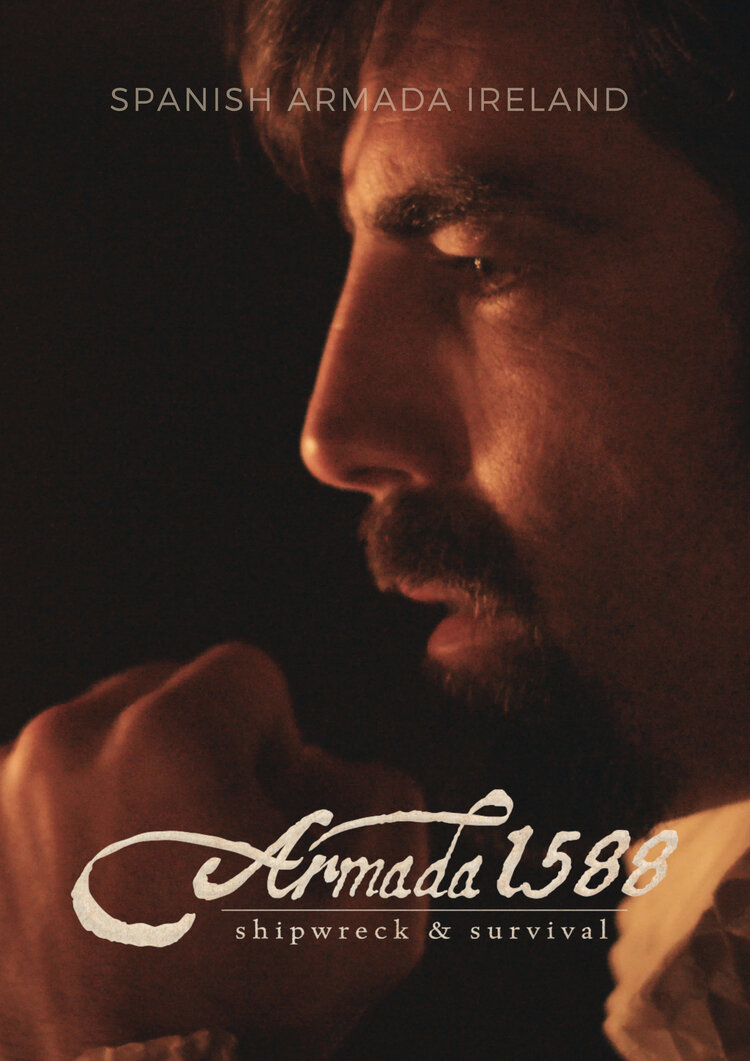 For several days, three Armada ships had sheltered in Sligo Bay. During the previous week, they had been blown badly off course by strong westerly winds and were heading towards the Irish coast. The three ships were all from the Levant Squadron, Mediterranean merchant ships that King Philip II of Spain had commandeered for the Armada, and which were wholly unsuitable both for naval battle and for sailing through stormy Atlantic seas. Of the 10 Levanters that sailed as part of the Spanish Armada, only 2 returned safely to Spain, the others foundered off the Irish coast.

Notwithstanding their lack of seaworthiness, the ships that arrived into Sligo Bay were some of the biggest in the entire Armada fleet. The Lisbon muster shows that they carried in excess of 1,000 men between them. La Lavia (302 men), Santa María de Visón (307) and La Juliana (412), as well as transporting large numbers of soldiers and sailors, also carried many of the great siege guns that would be used for the invasion of England. Between them, they were likely carrying upwards of 80 cannon.

De Cuéllar was an unexpected guest aboard La Lavia. He was Captain of another ship, the San Pedro, which had broken formation during the naval battle against the English, a serious offence for which he, as Captain, was sentenced to death. De Cuéllar appealed this sentence, and he was stood down as Captain of the San Pedro and transferred to La Lavia, ship of the Armada’s Judge Advocate, who had the authority to rule on whether De Cuéllar should be hanged. While his sentence was being considered, the ships found themselves in the gravest of peril off the Sligo coast.

The three ships lay at anchor during a lull in the weather, waiting desperately for the winds to turn in their favour so that they could get into open seas and sail for Spain. In the meantime, word had reached the English garrison in Ballymote that the Spanish ships had been sighted near Sligo.  The ships were close enough to land that the Spanish sailors could see the English soldiers as well as the natives lining the shore. They knew that if the winds didn’t turn easterly, a grim fate awaited them “at the hands of the barbarous English,”, as described by De Cuéllar.

On the afternoon of September 21, three days after the Spanish ships were first sighted, a storm which due to its ferocity became known as The Great Gale blew in from the Atlantic, driving the three Spanish ships towards the coast. As De Cuéllar later wrote: “Such a great gale arose on our beam, with a sea running as high as the heavens, so that the cables could not hold us, nor the sails serve us, and we were driven towards the shore.”

As the three ships foundered off Streedagh Beach, the Spanish sailors and soldiers jumped overboard. Mistaking the depth of the water and laden down with gold and other items saved from the ships, many of them drowned, and most of those who struggled ashore fell upon the swords of the English. Many were also beaten up and robbed by the natives who had congregated on the beach. How De Cuéllar escaped is uncertain. But he managed to crawl up the beach in exhaustion, before diving over the dunes, where he lay like a dead man hidden among the rushes.

The following morning De Cuéllar manages to rouse himself. It appears that by now the English forces have left the beach and most of the natives are elsewhere. Having badly wounded his leg in the act of jumping overboard from his ship, he limps towards a monastery, nearby Staad Abbey, most likely, where, to his horror, he sees twelve Spanish soldiers hanging from the rafters, “dead at the hands of the Lutheran English.”

He returns to the beach, where he is promptly set upon and robbed, one of several such events to happen to him. He manages to make good his escape, heading inland towards Ben Bulben, before skirting cross country towards Glencar, and the promise of aid by Gaelic chieftain Brian O’Rourke. During the days he travels cross country, he is beset by gangs of marauding natives, but he also encounters some good fortune and friendship along the way.

He reaches O’Rourke’s castle after several days in the wilderness, where he finds other Spaniards who have also made their way there to find shelter. O’Rourke is away fighting the English, and no sooner has De Cuéllar reached the castle when word comes that one of the Spanish ships, La Girona, has sheltered near Killybegs to repair its broken rudder, and that all remaining Spaniards should quickly make their way there in a final chance to get home. De Cuéllar, whose leg is still injured, falls behind his fellow Spaniards, and never reaches La Girona. Again this turns out to be a stroke of good fortune for him, unfortunately, the ship, which sails towards Scotland, sinks near the Giant’s Causeway in Antrim, and all but 5 of the 1,300 men on board are lost.

Nevertheless, De Cuéllar still needs help, and makes his way towards Rossclogher (near Kinlough in County Leitrim). Along the way there, he is captured and held hostage for several days, but he manages to escape and find shelter with another local chieftain, Tadhg Óg McClancy. De Cuéllar ends up staying at McClancy’s island castle on Lough Melvin for three months, “acting like a real savage like themselves.” Despite McClancy’s entreaties towards him – including the offer of the hand of his own sister in marriage – De Cuéllar yearns to return to Spain. He soon has another altercation with English forces sent to eradicate any Spaniards that remain in the west of Ireland. A mix of good fortune, the strength of McClancy’s island keep and bad weather, force the English to turn back, and De Cuéllar and the other Spaniards make quick their escape.

Eventually, De Cuéllar makes his way from Ireland to Scotland, and from there to the safety of the city of Antwerp in Flanders (part of modern day Netherlands) which is under Spanish control. There, thirteen months after being shipwrecked at Streedagh, he writes his letter describing in great details the events which took place in Ireland. While letter writing was a common way for Spanish officers to describe the events of war, there can be no doubt that De Cuéllar had an extra motivation for writing such a detailed account of his time in Ireland. The death sentence imposed on him following the naval battle against the English was still in place, and he knew that upon his return to Spain, he could easily find himself at the end of a hangman’s noose.

De Cuéllar’s letter has the desired effect. He is issued with a royal pardon, and once again enters the King’s service. He takes part in several other Spanish military campaigns in both Flanders and Naples, and he spends his final years on the seas between Spain and the Americas, a loyal servant of Philip II to the end.

The film Armada 1588 : Shipwreck & Survival closely follows the contents of De Cuéllar’s letter. While certain events have been omitted or amended, this film is as close a depiction as we could realistically manage, remaining faithful to the extraordinary events that befell him, and his retelling of this story in his own words.

The film was directed by Al Butler of Mediacoop, who co-wrote the script with Micheál Ó Domhnaill, who was also one of the producers of the film. The film’s other producers were Colin Norris and Max Carpio. The lead role of Francisco de Cuéllar was played by Spanish actor Fernando Corral, and funding was provided by the Department of Rural & Community Development, Sligo County Council and Spanish Armada Ireland through the Town & Village Renewal Fund.

For more details, and to download the film, visit SpanishArmadaIreland.com.