The De Cuéllar Trail is located along the Wild Atlantic Way in one of Ireland’s most scenic counties, Sligo. But in September 1588 it lay claim to one of the most gruesome and astonishing episodes in Irish history.

Following King Philip II of Spain’s failed naval invasion of England, the Spanish Armada – a fleet of 130 ships – was forced to flee northwards, around the coasts of Scotland and Ireland, aiming to return to Spain.  However, terrifying winter storms threw some of the ships off course, and 3 of them, La Lavia, Santa Maria de Visión and La Juliana were wrecked on Streedagh Beach in Sligo. More than 1,000 men died.
From the wreckage rose a small number of survivors, among them Captain Francisco de Cuéllar, a Spanish sailor, who managed to survive the attacks of the English forces. Aided and put upon in equal measure by the native Irish, he lived to tell the tale of his adventures in his memoir written in 1589.

This contemporaneous account forms the basis for what is known as the De Cuéllar Trail. Follow in his footsteps, visit the places he saw, and savour a unique part of Irish history. Many of the locations below were described by de Cuéllar as he made his way to freedom through the north of Ireland, taking a sea crossing to Scotland and ultimately finding safety in Spanish-controlled Flanders. 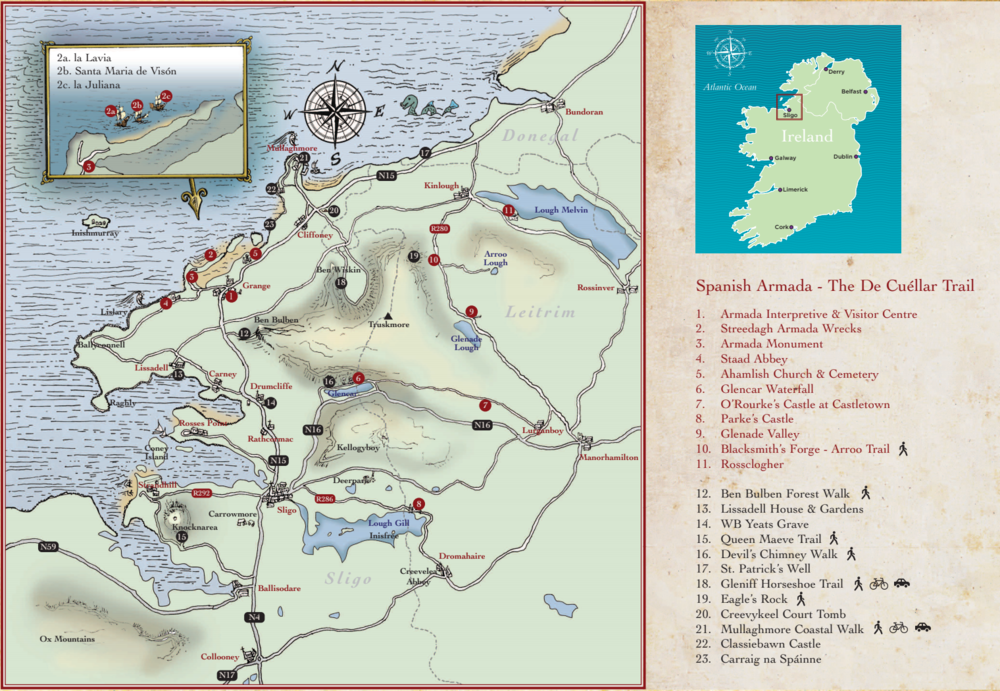 Information point where visitors can find out about how the Spanish Armada story unfolded in Sligo. Follow the story of how three great Armada ships ended up wrecked on Streedagh and learn of the extraordinary recoveries of cannon and other items from the wrecks. Meet Captain Francisco de Cuéllar, who survived the wrecks at Streedagh, and view replica Spanish weaponry and artefacts typical of the time.

Where 3 Spanish Armada Ships – La Lavia, Santa Maria de Visón and La Juliana were wrecked during winter storms in 1588. The wrecks lie beneath the sands but many items, including cannon and other artefacts, have been recovered and are under conservation. Also known as one of Ireland’s most beautiful beaches, stretching for almost 3km of white sand and pure ocean.

“Within the space of an hour all three ships were broken in pieces, so thar there did not escape three hundred men, and more than one thousand were drowned, among them many persons of importance, captains, gentlemen, and other officials.” – Capt. Francisco de Cuéllar

Unveiled in 1988, to commemorate the 400 year anniversary of the Spanish Armada, this model of the prow of an Armada ship faces towards the wild Atlantic and provides a magnificent panorama of mountains and sea.

One gable wall is all that survives of Staad Abbey, where Captain de Cuéllar seeks refuge as he escapes from the wreck site at Streedagh.  However he is met with the chilling sight of 12 of his countrymen left hanging from the rafters by English soldiers. The Abbey sits on the edge of the Atlantic overlooking a stone beach.

“At the dawn of day I began to walk, little by little, searching for a monastery of monks, that I might repair to it or might recover in it as best I could, which I arrived at with much trouble and toil. I found it deserted, and the church and images of the saints burned and completely ruined, and twelve Spaniards hanging within the church by the act of the Lutheran English.” – Capt. Francisco de Cuéllar

Another possible route taken by de Cuéllar as he escapes from the beach.

At Glencar lake, beside a magnificent waterfall, de Cuéllar comes upon a group of unoccupied huts, that it would appear, are used for the storage of oats. On entering on of these huts he finds it occupied by three other Spaniards seeking refuge there. They decide to seek shelter with the Irish Chieftain,   O’Rourke of Breffni, at Castletown.

“I met with a lake, around which there were about thirty huts, all forsaken and unoccupied, and there I wished to pass the night.” – Capt. Francisco de Cuéllar

At Castletown, one of the O’Rourke of Breffni’s strongholds, the small group of Spanish arrive seeking shelter. Brian O’Rourke paid dearly for the support he gave de Cuéllar and his comrades, and he was executed for treason in 1591 at Tyburn, London.

Another of O’Rourke’s strongholds, which was rebuilt in the 17th century and is located along the shores of Lough Gill. De Cuéllar is thought to have spent time here as he escaped from the English forces.

“Early next day, about twenty of us Spaniards collected together at the house of this Senor de Ruurque O’Rourke, in order that they might give us something to eat, for the love of God.” – Capt. Francisco de Cuéllar

De Cuéllar takes directions from a clergyman to take this route to join Spanish ship La Girona at Killybegs. However, he falls foul of another traveller, a blacksmith, who holds him captive and forces him to work for him at his forge. In a twist of fate, de Cuéllar was lucky not to have reached La Girona, which was subsequently wrecked in another storm off the Causeway Coast with the loss of all 1,200 souls on board.

De Cuéllar spends some time working under duress as a blacksmith, before making good his escape to Rossclogher where McClancy, Chieftain of Dartry, has his stronghold.

The island stronghold of McClancy, sub-Cheiftain to O’Rourke, who provides de Cuéllar with protection. With his health now recovering, de Cuéllar spends 3 months here, and when McClancy retreats in the face of the English forces, de Cuéllar, along with a small band of men, successfully defends the island fortification. He leaves for the Causeway Coast in the New Year. McCLancy suffers a terrible fate, executed by the English in 1589.

“When he saw me so stripped of clothing and covered with straw, he and all those who were with him grieved greatly, and their women even wept to see me so badly treated. They helped me as best they could with a blanket of the kind they use, and I remained there three months, acting as a real savage like themselves.”

“The men are all large bodied, and of handsome features and limbs; and as active as the roe-deer… the most of the women are very beautiful… in short, in this kingdom there is neither justice nor right, and everyone does what he pleases.” – Capt. Francisco de Cuéllar

A walking path around on of the most fascinating mountains of Ireland, Benbulben.

Formed  of limestone and shale, the mountain is sometimes called Ireland’s “Table Mountain”. The walk starts in a nearby forest and then opens up to stunning views of the mountain.

Surrounded by sea, mountains and woodlands the country house from the 19th century is well worth a visit.

Set against the beautiful backdrop of the mountain Benbulben in Drumcliffe, County Sligo sits the headstone of one of Ireland’s most famous writers; WB Yeats.

A newly launched trail that includes over500 wooden steps. The end of the trail opens up to beautiful views of Sligo and Ballisodare Bay. The trail is located near the gorgeous surroundings of Strandhill.

The Devil’s Chimney is Ireland’s highest waterfall. It is only a short walk up a slope near Glencar lake. The woodland path that initiates the walk is new and very rewarding. Despite its name the waterfall is quiet and a beautiful sight to behold.

Near the Duff River on the Sligo-Leitrim border lies St.Patrick’s well.

The well is located in a primeval forest and is reputedly on of the saint St. Patrick’s favourite places. People from all over the world still comes to the well to pray or just take in the fascinating scenery and history.

A trail along quiet roads by the wild Dartry Mountains, the Gleniff Horseshoe Trail offers amazing views of the Donegal Bay and the Ulster County. Situated on the east side of the road is Sligo’s tallest mountain, Truskmore.

Eagle’s Rock is a free-standing natural rock tower located by the Dartry Mountains. Reaching the height of 330m it is the highest rock tower on Ireland.

The surroundings hide a fascinating history and it is no surprise that this is one of the most iconic landmarks in all of Ireland.

Near the sea at Mullaghmore lies on of the finest examples of an ancient court tomb.

Dating from 4000-2500 BC the tomb is astonishingly well preserved and its magnificent ruins is well worth a trip.

Mullaghmore offers a pure white beach and beautiful views of Benbulben and Benwiskin.

The coastal walk starts off with Bunduff Strand and continues along the coastline up to Mullaghmore Head.

The Classibawn Castle is actually a country house built in the 19th century, near the village of Cliffoney, County Sligo. It was built for the Viscount Palmerston and was formerly an estate of almost 10,000 acres.

In folk memory, directly behind the beach lies the resting ground of many of the poor souls lost after the Armada ships were wrecked. 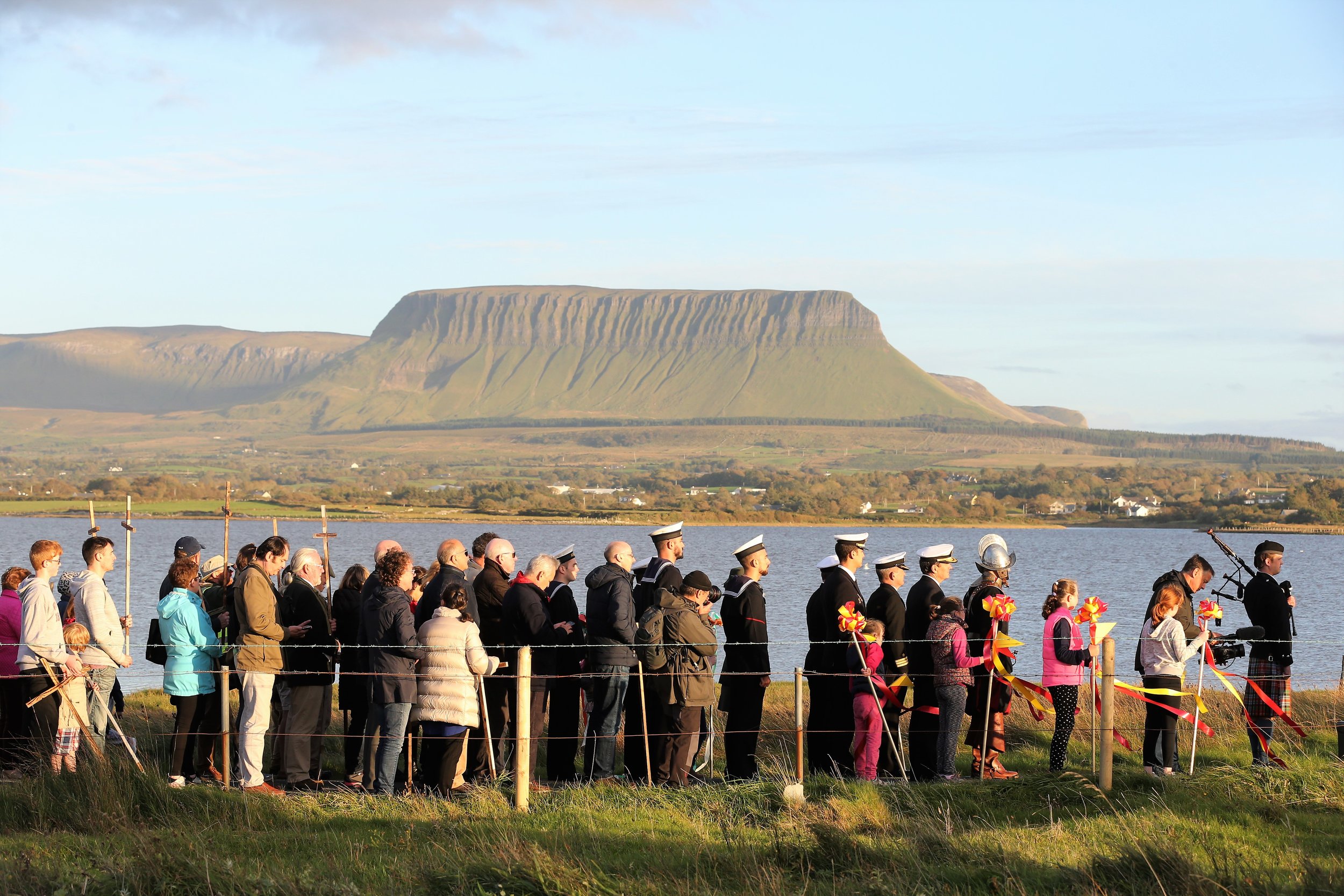 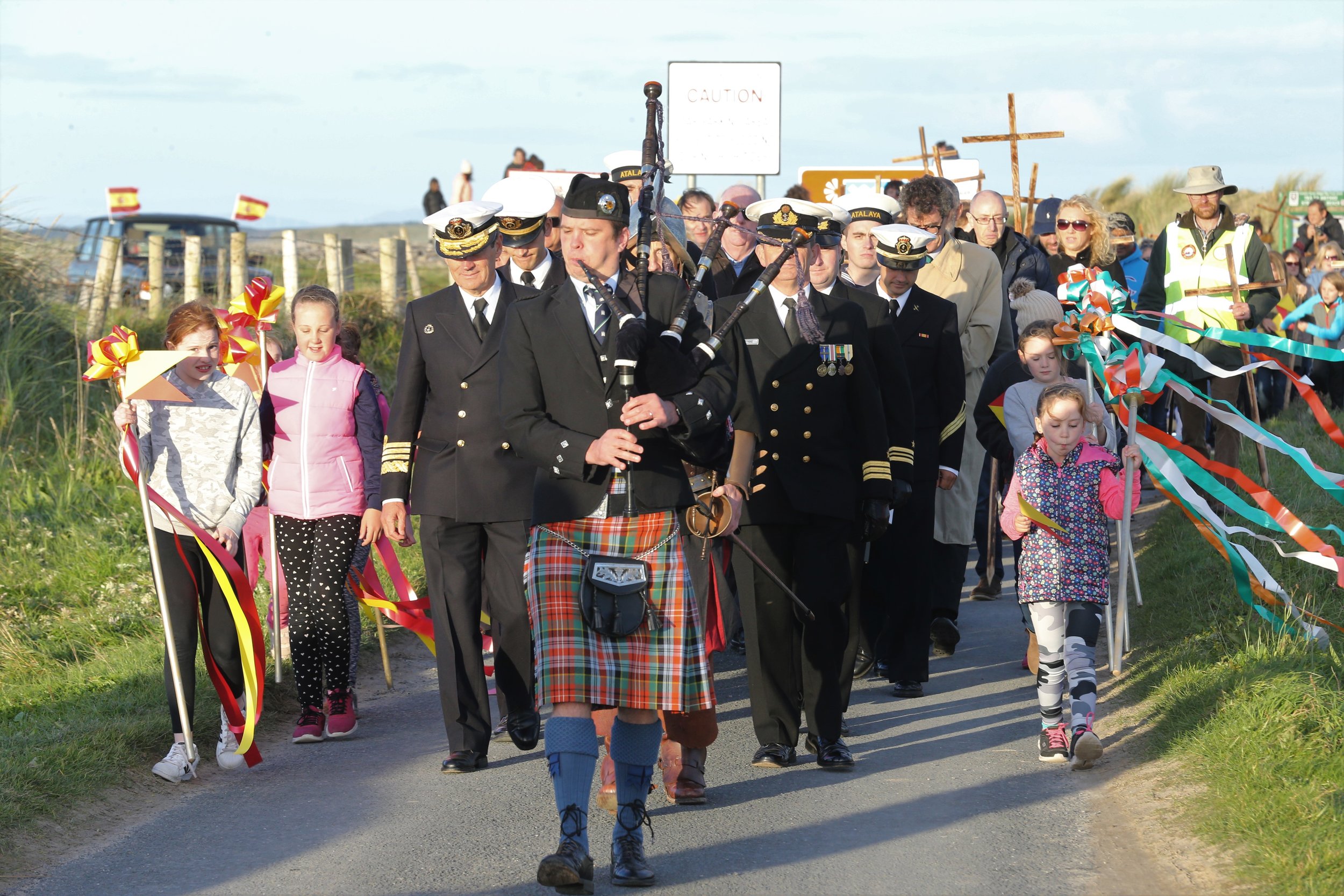 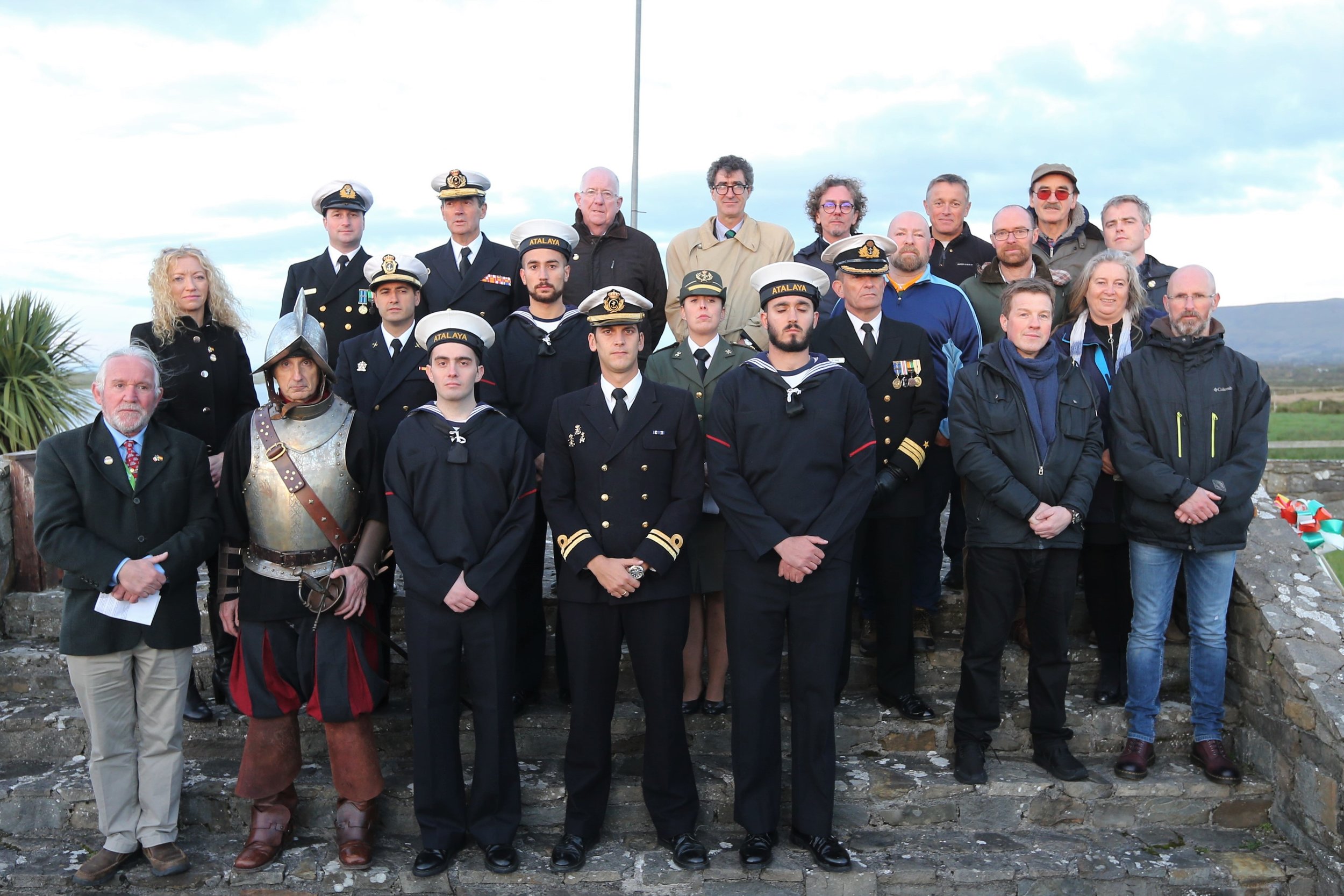